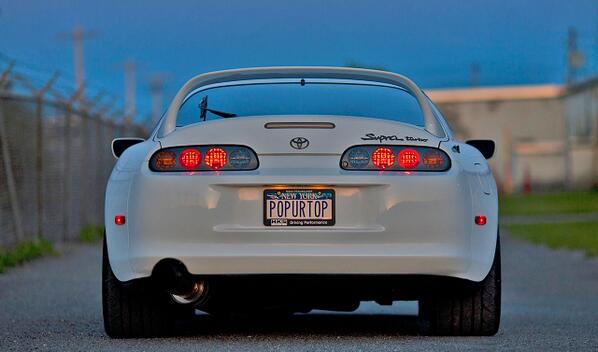 One of the most iconic JDM cars* to be produced. It’s a work of art. It’s a poster car pretty much. Imagine if you owned one of these beasts. That would be a dream for most JDM fans. It’s music to my ears when I hear that 2JZ engine

The Supra is a great car because it can be any car you want. For example it can be a drag car, rally car, daily driver, show car, etc. The reason why I’m saying it would be nice to own one of these is because they are quite expensive now a days. Yeah I said EXPENSIVE. I never thought a Toyota would be expensive. If you ever want to pick one of these bad boys up, you are going to have to spend around 45 000 USD to even 60k for a really nice condition one. Let me give you an example of what I mean. For example a Ferrari 360 Modena is 50k to 75k. Yeah, as you can see they are quite expensive but then again a normal Ferrari isn’t 60 grand. I mean like what Ferrari can you get for 60k, right? What I’m trying to say is that the Toyota Supra is worth the money and if you have 50k laying around somewhere you should definitely pick one up.

Here are some mods I think you should really consider doing to a or your Supra.